The station opened on 9 January 1910 under the name Vaugirard when the section linked the north and south sections of the line. However, when a new station opened close by on the metro ligne 12, the name was changed to its present name - Saint-Placide, another street at proximity, which in turn takes it name from a church dedicated to Saint-Placide a Benedict monk of the 6th century.

Saint Placide is an underground station situated in the 6th arrondissement with no connections.

It is served by the metro line 4. 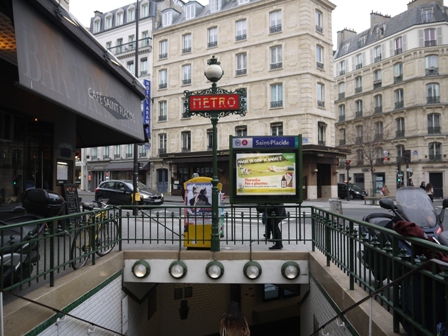 Entrance to the station. At the far side of the entrance, at the centre, is a lamppost of type "Val d‘Osne". Around the red METRO sign are small metal decorations.

Next to the lamppost is the station panel: a square metal box with the station name, the number of the metro line and a large area under glass where adverts are displayed.

The station is surrounded by a green metal fence consisting of round bars of equal lenghs topped by little balls. Two metal hand rails are fixed to it and the side walls. The walls are tiled in small white tiles and a top row of green border tiles.

At ground level are five small round lights with a wide green metal rim. 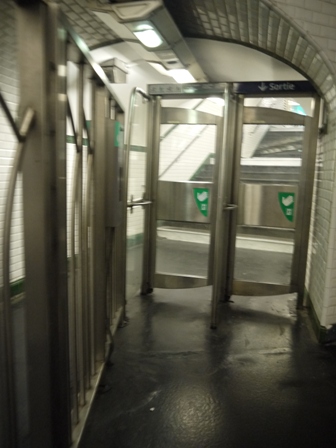 The platform exit is through one of two metal doors with glass panels. Passengers have to push the metal strip for the doors to open.

The ground is painted grey.

Passengers go down to the platform on the other side of the tall stainless steel fence. 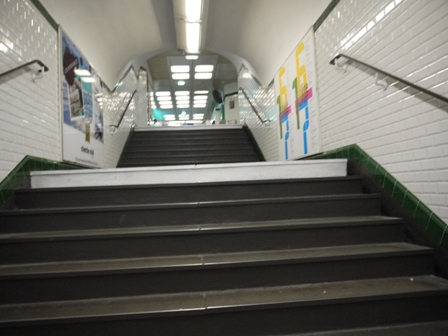 The stairs have two landings. The last step is painted white to highlight them. Large advertising panels in metal frames have been fixed to the walls at the landings.

Metal hand rails on the walls guide users down the stairs.

The walls are tiled at the bottom and painted at the top. 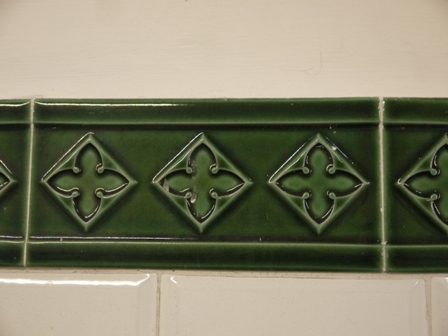 Along the apex is a band of double light tubes. All lights in the metro stations is now LED.

At the bottom of the walls is a row of dark green plein tiles.

The border between the painted top and the tiled bottom is marked by a narrow row of green border tiles.

Each tile has three diamond shapes with a four-petalled flower in it. 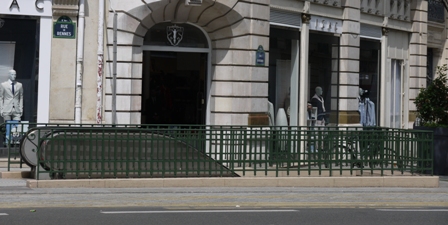 It is possible to leave Saint-Placide by another exit. This exit only has en escalator leading to the surface.

Unlike the fence of the main entry, this fence is made of flat green metal bars. 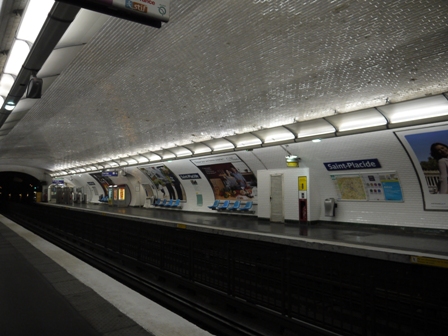 The station has two side platforms. The tracks in the middle are separated by a low metal fence. The edges of the platforms are painted white.

The low-arched ceiling and the walls are tiled.

Seating is provided in the form of groups of medium blue plastic chairs fixed to the wall.

Advertising posters can be found in metal frames behind the seats. 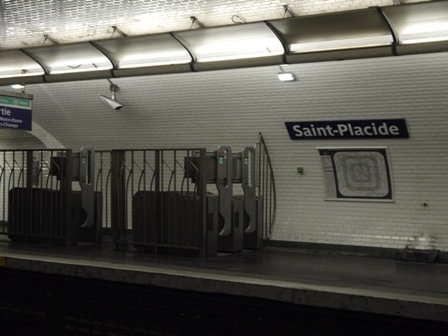 Ticket validation is carried out at platform level. Passengers either introduce their paper ticket in the slot or place their electronic pass near the sensor of the entrance barrier. They then push the released barrier arm.

The silver light fittings have been designed by Bruno-Gaudin. The lights fixed on a lower metal bar are reflecting from the curved upper sheet. 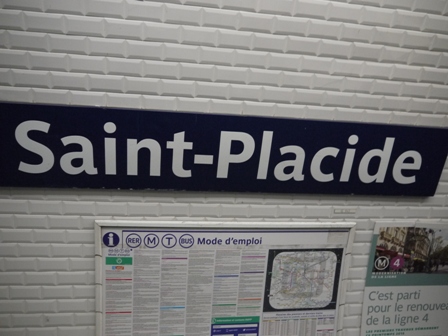 The platform sign consists of white mixed letters on a blue plasticed bar without frame. It has been placed on white Metro tiles with a raised centre.