It is situated at the intersection of the 3rd, 10th and 11th arrondissements, under the place de la République. 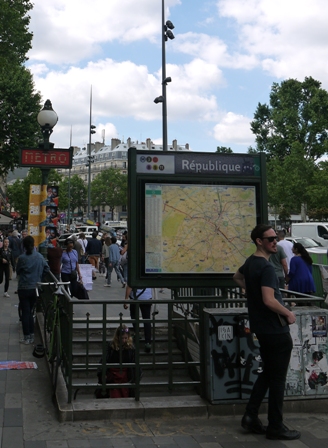 This one of the smaller entrances. It is surrounded by a green fence with bars of different heights. 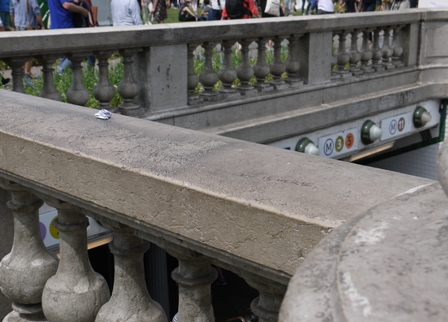 A map of the metro network hangs in a large green showcase. Above the map are the station name and the numbers of the metro lines stopping here. 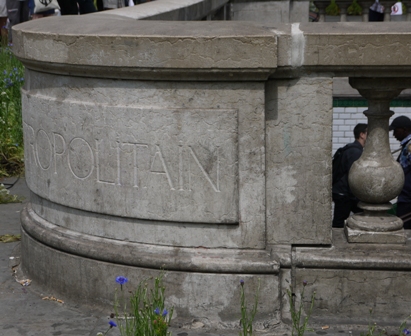 The station has a lamppost designed by Adolphe Dervaux (1871 - 1945). On top of the green lamppost is a white ball-shaped light and  a frame with white letters on a red background. 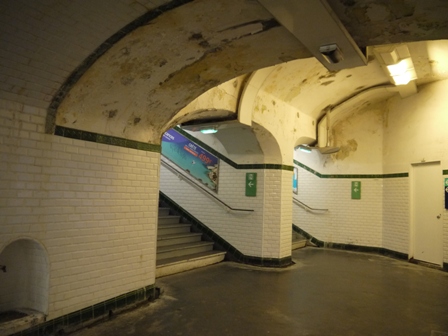 The large main entrance is surrounded by a ballustrade of light coloured stone.

The word 'METROPOLITAIN' is cut in the rounded cornerstone.

Corridor and stairs towards the platform of line 3.

Small advertising boards have been placed between the handrail and the border tiles.

The ceiling is painted, but the walls are tiled. 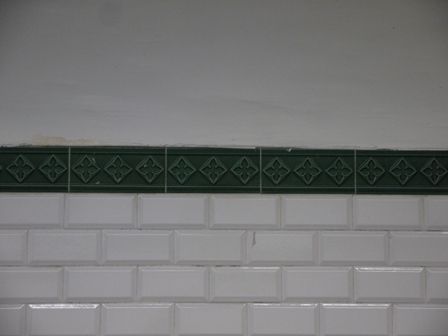 The white ceramic tiles are of the "Metro" style, with raised centres. Each of the tiles in the green frieze has three flowers in diamonds. 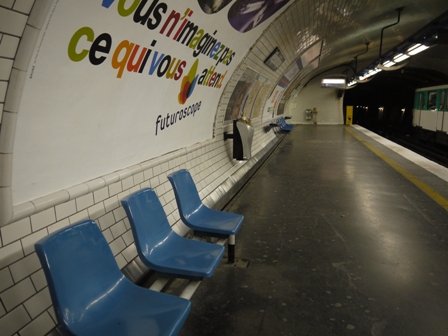 Platform eastbound towards the next station Parmentier (Gallieni).

Seating is in groups of 3 blue plastic seats fixed to the ground. The curved walls are tiled white.

The edge of the platform is marked in white.

A row of about 20 cm wide nobbed tiles has been added to warn sight-impaired travellers of the edge, followed by a yellow line. 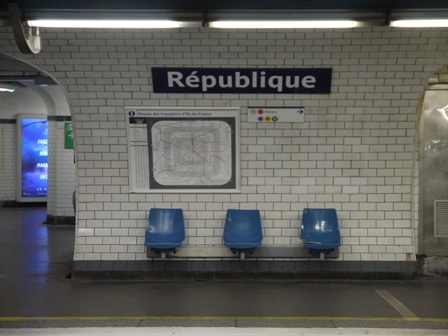 Group of three blue plastic seats under the station name sign and plan of metro system with zones.

Transfer directions to connecting metros are found next to it.

The platform edge is marked with a white line, some grey tiles with raised circles and a yellow line. 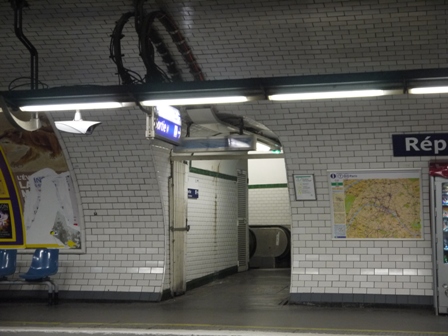 Exit from platform towards escalator. The metal folding gate, which can stop access to the space, has been secured at the side. Security cameras surveil the platform. 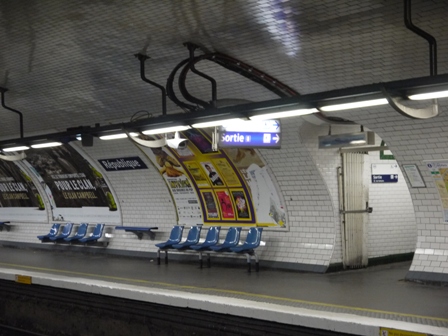 Blue seats and bench on the other platform.

The lights reflect in the flat white tiles on the ceiling. The structures of the light fittings have a resemblence of scythes; they are in the Ouï-dire style.

The platform is quite narrow. 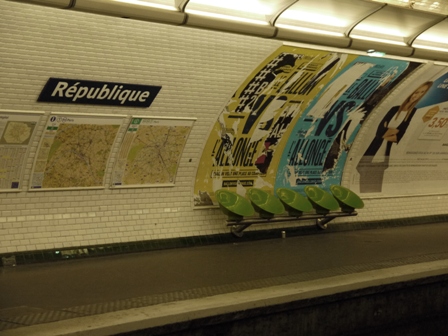 The seats of the platform are green, metal half bowls fixed on a steel bar on the wall.

At ground level is a row of green plein tiles.

The walls are tiled with white tiles with a raised centre.

The edge of the platform is painted in white with a row of nobbed tiles. 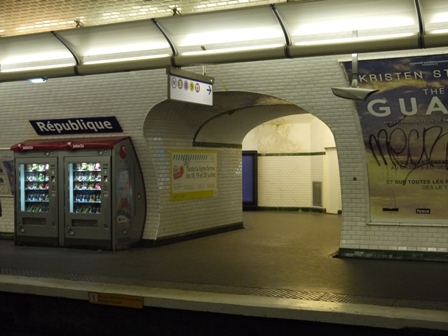 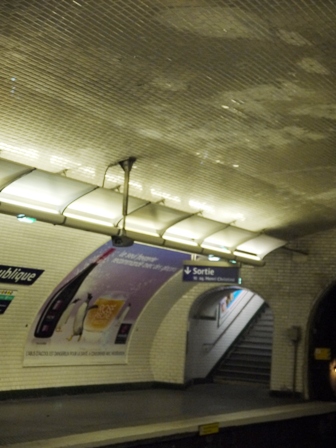 Transfer to the other lines serving this station is by a corridor on the side of the platform.

A couple of snack machines are available.

The signage is in white mixed case letters on a blue plastic sign.

The metal lights are uplighting, reflecting on the top of the metal.

Advertising is in large frames with white ceramic tiles. 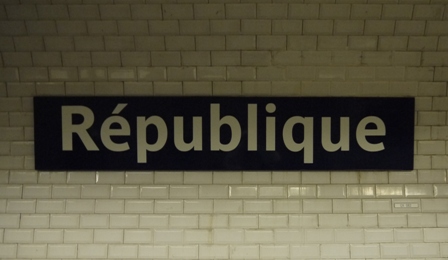 The sign is located on white tiles of the type "Metro". 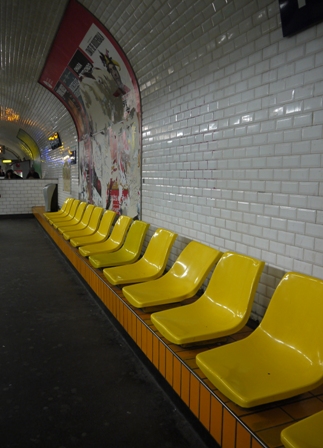 The yellow plastic seats are mounted on a base with orange tiles.

The walls are curved and covered in white tiles. The large advertising frame is metal. 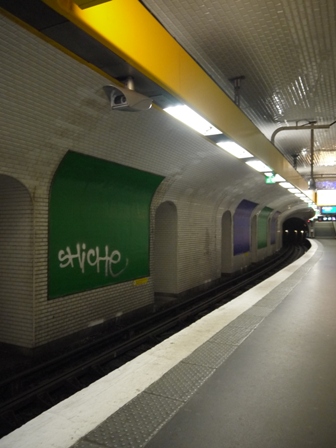 The two platforms are separated by a tiled wall with arches to allow access in case of emergency or for RATP workers.

Advertising boards in flat steel frames are located between most arches, but no advertising had been added. Instead the boards sported blue or green backgrounds.

The lights in yellow casings are suspended from the ceiling. They run above the edge of the tracks. The edge of the platform is marked in white, with no additional yellow line. A row of about 20 cm wide nobbed tiles has been added to warn sight-impaired travellers of the edge. 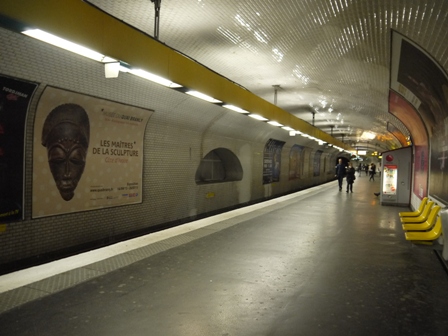 The yellow lights hung from the ceiling match the plastic seats fixed to the wall.

The two platforms of the line are separated by a tiled wall with some semi-circular openings. The ceiling is vaulted and tiled.

The advertising posters are placed both on the wall behind the track as well as on wall on the platform and are in metal frames. 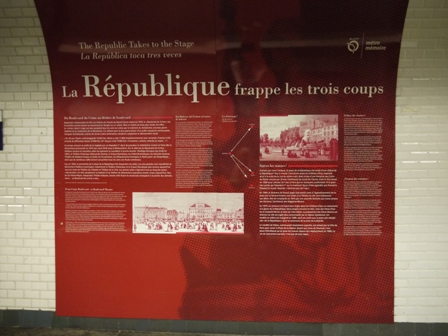 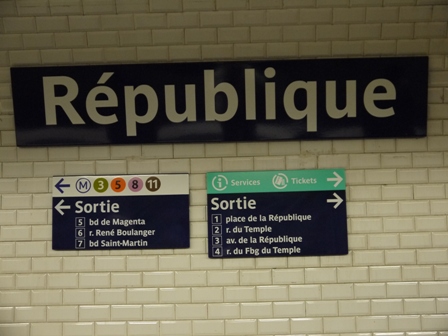 The Republic takes to the stage - A large display showing the change from boulevard of crime to boulevard of theatre and the history of the statues on the place de la republique. Texts are in French, English and Spanish.

Name signage on a plasticised sign. The station name is in white letters. Underneath it are two signs. 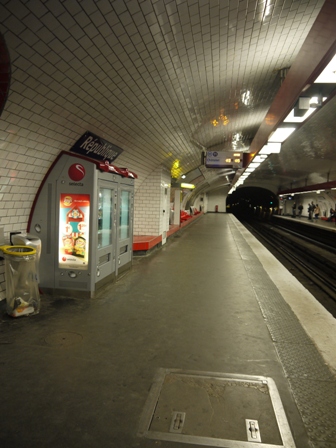 The two platforms lie opposite, the tracks between them. Automatic barriers are not installed yet. The ceiling is vaulted and covered in white, flat tiles.

Small bases covered in red tiles can be used seating where the red plastic seats have been removed..

The lights are in red rectangular metal boxes stretching from one end of the platform to the other. 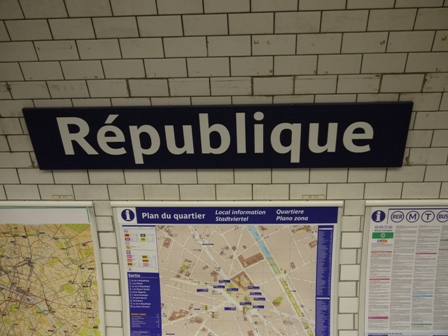 White flat tiles and the station name on an enamelled sign over a map of the local area. 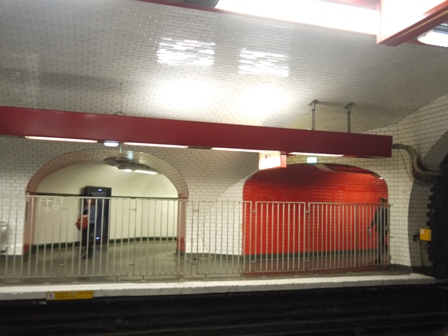 Passengers can access the platform via two tunnels. High fences have been put up to prevent anybody from accidentally falling onto the tracks. 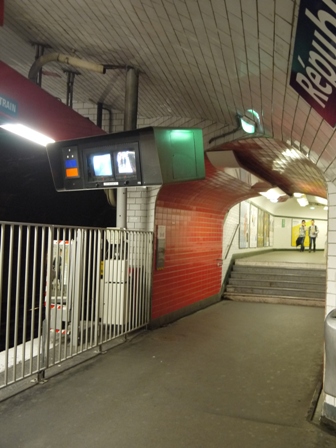 The tunnel on the other platform, at the front of the train. The sides of the tunnel entrance are tiled in dark orange.

Monitors are suspended from the ceiling to allow the driver to view the platform via the security cameras.

The front of the train and the platform are separated by a tall metal fence.