The station opened on 21 April 1908 as part of the initial section from Châtelet. It is the northern terminus of the line 4. The hamlet Clignancourt used to belong to the Abbey of Saint Denis, but was absorbed by Paris in 1860.

Porte de Clignancourt is an underground station situated in the 18th arrondissement. 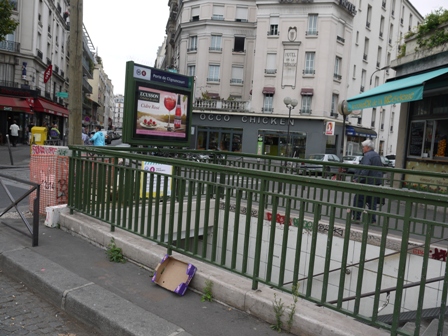 The entrance is surrounded by a green metal railing made of vertical bars of equal lenths. It is fixed on a base of light coloured stones.

On top of the back is the station sign in a green metal box. Next to the name is the number of the metro line. Below is a glass panel with revolving advertissements.

The walls of the entrance are tiled in large white flat ceramic tiles.

Metal handrails have been fixed to the side walls. 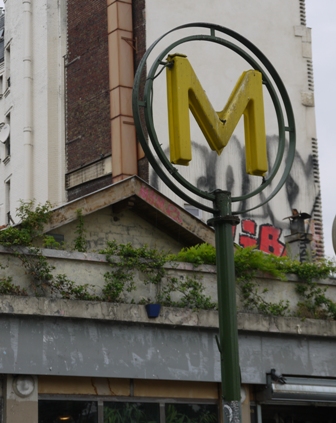 The entrance is marked with a tall green metal pole with an inner and an outer circle.

Inside the circle is a yellow capital letter M, which gets lit at darkness.

The design of this pole became popular in the 1970. 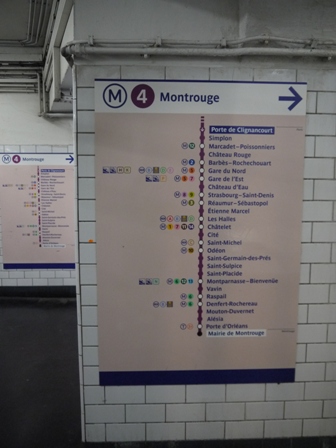 A plan of the route hangs on the walls of both stairwells. The line is being extended at present.

The station is a terminal with a terminal loop, which allows the trains to change to the other platform. 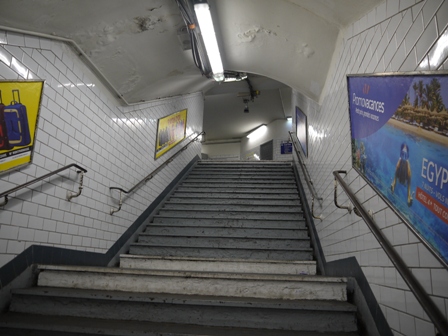 Stairs are leading from the ticket office to the platform.

A landing is half way down the stairs, giving passengers the possibility to have a rest when going up the stairs.

The walls have been tiled, the ceiling has been painted white. Metal rails have been placed on both sides.

Narrow advertising panels have been fixed in metal frames above the rails. 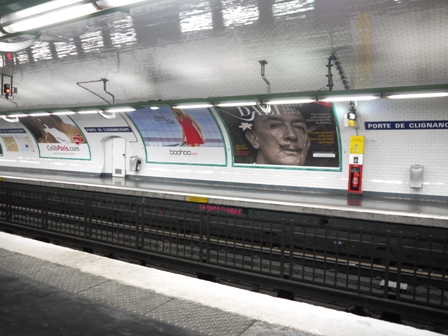 The two side platforms are separated by a ground level high 'picket' fence.

The vaulted ceiling and walls are tiled in small white flat tiles.

The lights are in a green tube and open downwards. They are connected to the ceiling by scythe shaped silver brackets. 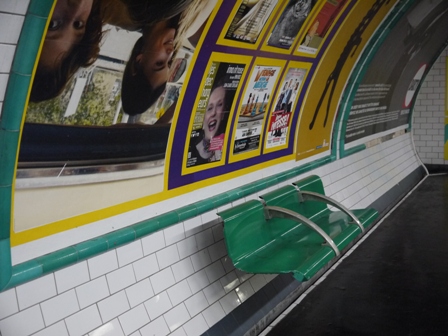 On the platform are several silver metal bins and an emergency station to call the station master, as well as a fire extinguisher.

Seating is in the form of a green metal bench dividing it with curved silver armrests into three seats. It is fixed to the wall.

The bottom row of tiles is grey and square.

The advertising frame behind the bench is made of rounded green ceramic tiles. 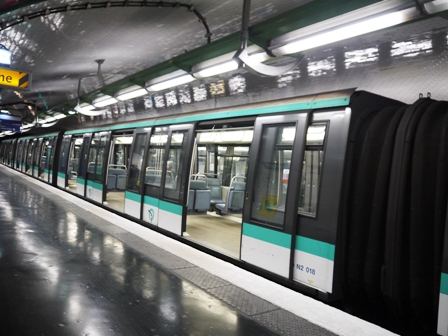 One of the metro trains waiting with open doors at the platform.

The ground has been painted a reflective grey.

The edge of the platform is marked in white. A row of about 20 cm wide nobbed grey tiles has been added to warn sight-impaired travellers of the edge.