The station opened on 27 April 1937 as the western terminal of the line 1.

The underground station Pont de Neuilly is situated in the prosperous community of Neuilly-sur-Seine. 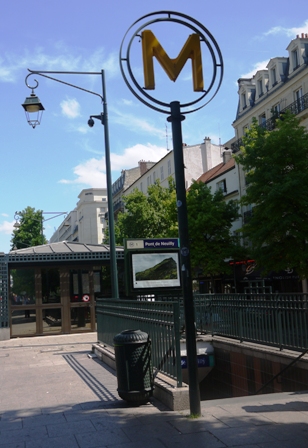 It is served by the metro line 1.

The entrance to the station is marked with a double circle with a large yellow letter M on a green pole.

The station sign is in a modern square frame. The top shows the station name and the number of the metro line.

The lower three quarter os the frame show a series of advertisements on the side facing the steps. On the other side is a plan of the metro. 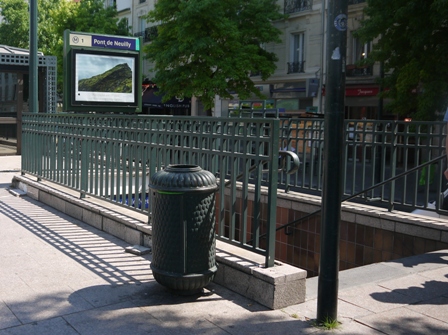 The green metal enclosure is made of bars of equal lengths with two horizontal bars at the top of the fence. The enclosure is fixed to a base.

The walls are tiled in brown vertical tiles.

Metal handrails have been fixed to both sides of the walls. 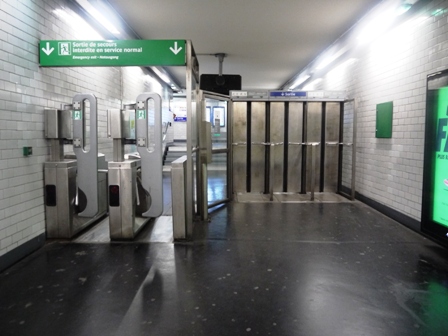 Once the ticket has been entered in the ticket slot, or regular travellers validate their electronic ticket, they can go through to the platforms. Entry is by two turnstyles and a barrier, which has to be pushed manually. Passengers with bulky items, such as pushchairs, can ask the station agents to open a glass panel.

Exit from the station is through three metal swing doors, which open in the middle, when a passenger stands on the pressure pad in front of it. 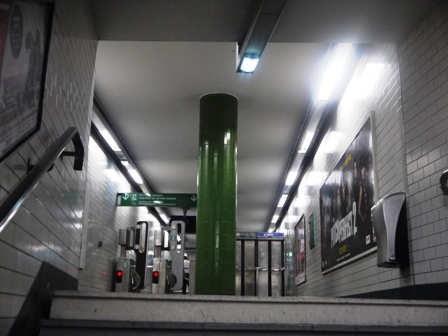 In the middle of the stairs is a green column supporting the ceiling.

The straight ceiling is painted white. Lighting has been fixed in strips on the side of the ceiling. 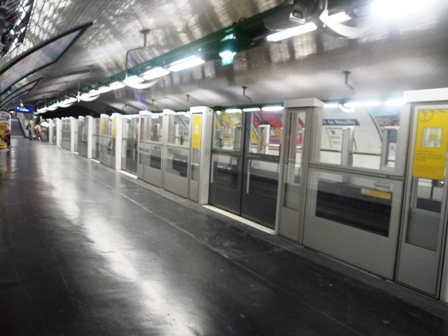 Platform doors were installed in this station in 2009.

The ground is painted grey, but marking the platform doors with a narrow white line.

The vaulted ceiling is tiled in white.

The lighting is in the Ouï-dire style. A number of scythe-shaped brackets are fixed to the ceiling and hold up a a row of dark green metal tubes with long LED lights. 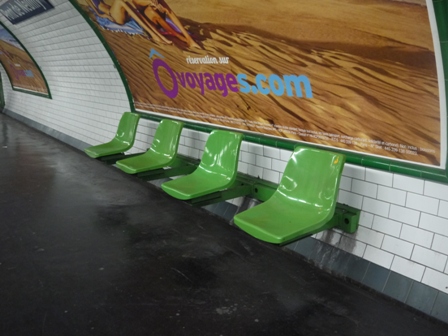 Light green plastic seats have been mounted on a green metal bar and fixed to the wall.

Advertising has been placed in advertising boards with frame made from dark green ceramic tiles.

The walls are tiled in white, flat horizontal ceramic tiles.

Close to the ground is a row of grey tiles. 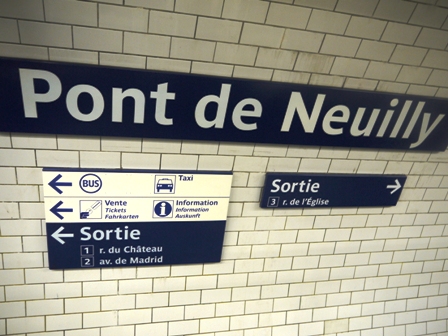 The signage consists of white mixed case letters on a blue plasticised sign without frame.

The station has three exits. Under the platform signage are two signs with directions to the exits, bus connections, taxis, ticket sales and information.