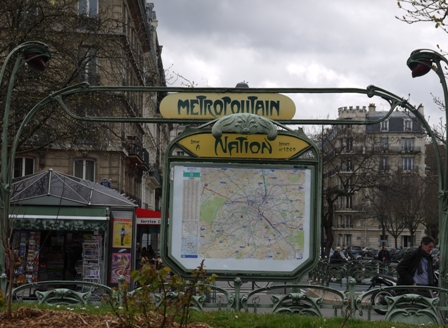 Nation has several entrances. This entrance is in the Art Nouveaux style.

The company sign is spanning the entrance.The word Metropolitain is written in green letters on a yellow background. Two tall green flower posts with red lights are at the side.

Looking from the other side, the station sign shows a metro network map. A long green flower lamp lights the writing at darkness.

The station name and metro lines as well as the RER A are written in Art Nouveau typeface. It is fixed to the green balustrade which was designed by Hector Guimard. 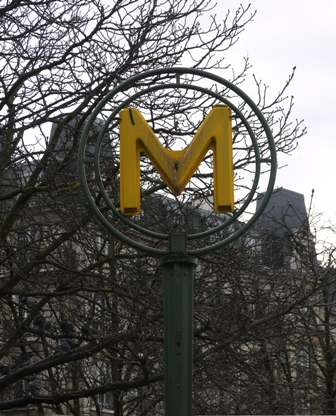 This 1960 style totem marks another entrance.

A large yellow letter M is enclosed in a double circle and fixed to the top of a pole.

The letter is lit at nighttime. 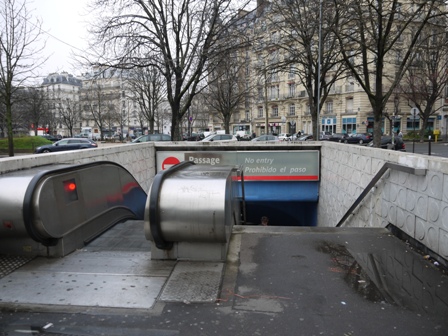 This is an exit only. It is surrounded by a light-coloured wall with a pattern of circles.

It has an escalator and a set of stairs.

Metal handrails have been fixed to the wall. 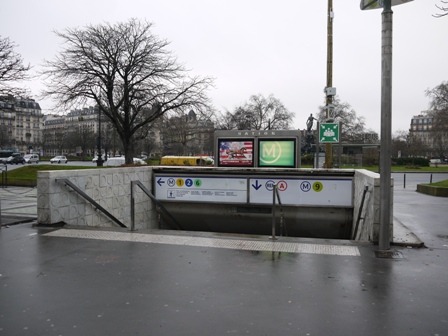 Four handrails have been installed at tge entrance, two on each of the walls and two a quarter of the distance from the wall.

Passengers are advised that this entrance is for the RER A and the line 9 only, Passengers for the other lines should use the entrance a little further to the left, towards rue Bel Air.

There are two station signs at the end of the surrounding wall.The left one has some advertising, the right one shows the logo of the metro. Next to them is the sign for the emergency assembly point. 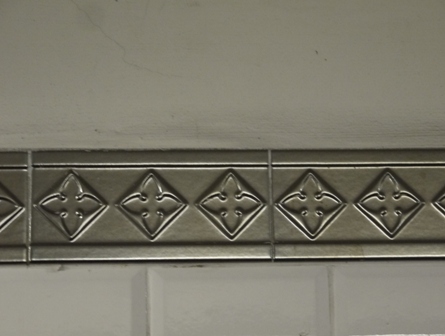 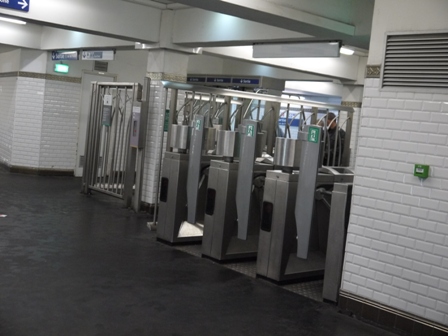 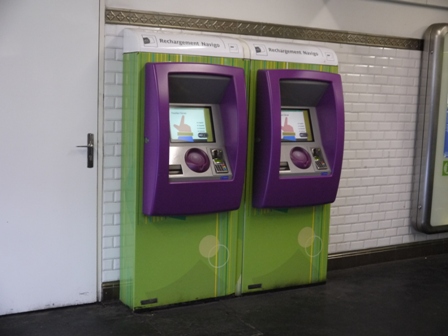 After the entrance hall passegers pass through one of the silver barriers. They can request to have the large metal gate opened if they have items that don't fit through the barriers.

The Ticket Hall has two ticket machines. Here you can recharge your transport pass or buy tickets. The ticket office is a few steps away, but if you want to pay cash you have to use the machines. 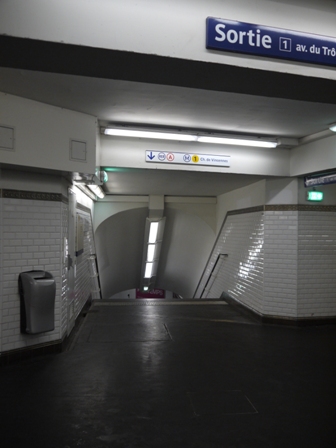 Corridor to the the RER A and the line 1 towards Chateau de Vincennes. 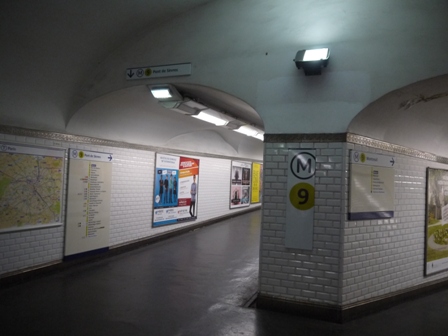 Corridors of the line 9. Each tunnel has a list of the stations on the wall. The walls are tiled until the point where the ceiling becomes vaulted and topped wih a row of silver border tiles. The ceiling is painted white. 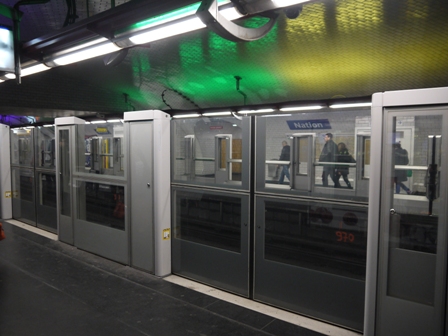 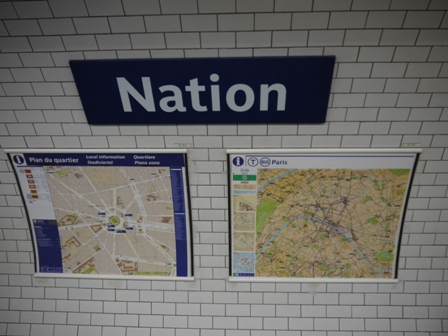 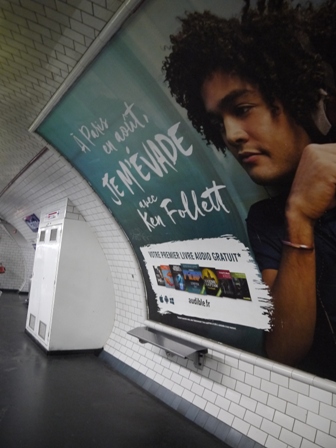 Platform doors have been installed.A white line has been painted where the doors open.

Lights are fixed to the ceiling in scythe shaped silver brackets.

The signage is written in white mixed case letters on a blue plasticised background without frame.

Advertising has been place in large advertising boards with a white ceramic frame.

In front of it is a small lean-to bench.

Line 2 started operation on 2 April 1903. Nation is one of its terminals. 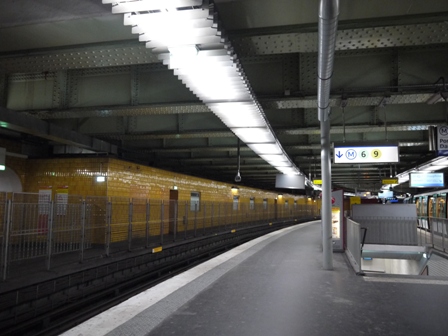 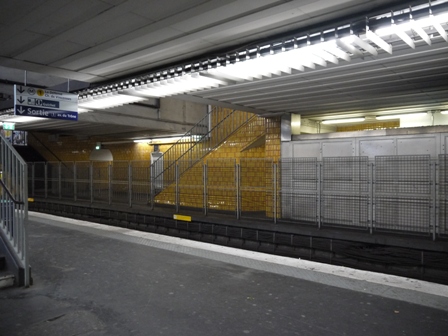 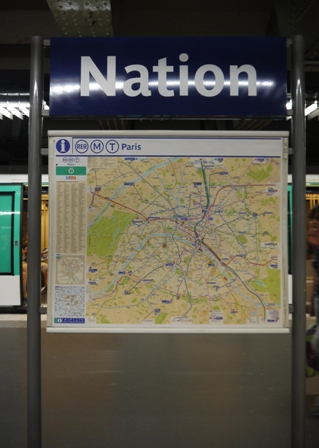 The ceiling is made up of deep silver steel beams.

The lights are a row above the platform edge and covered with Venetian blinds.

The platform on the other side of the tracks is separated by a tall metal fence. The walls behind it are tiled in golden yellow tiles, which are placed vertical.

The signage has been fixed to two poles. The station name has been written in white mixed case letters on a blue background.

Below it is a map of the bus, metro and tram network.

Line 6 started operation on 1 March 1909. Nation is one of the terminals. 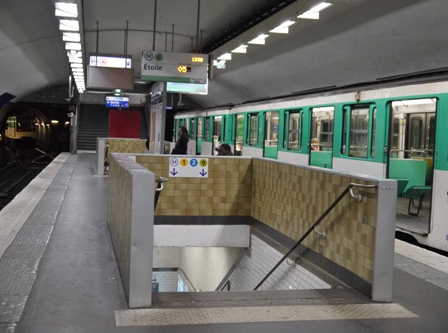 The connection to the other lines is in the centre of the platform. 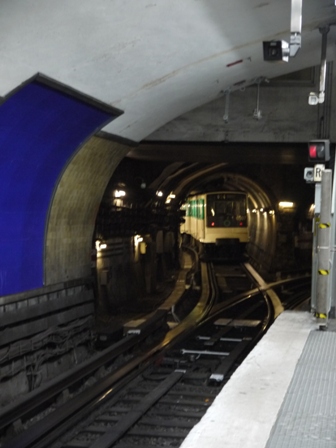 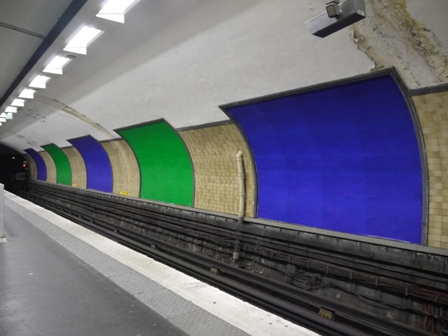 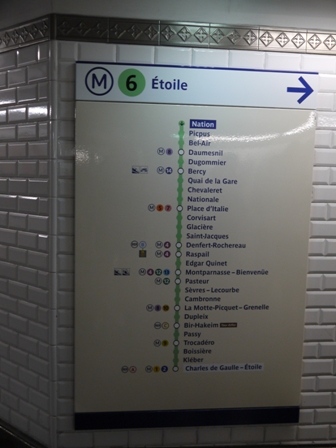 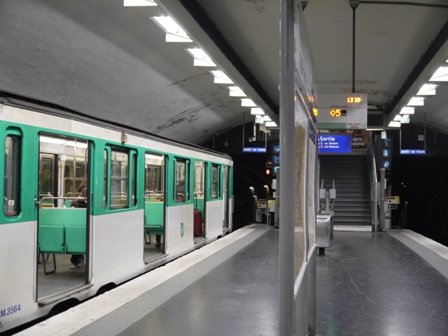 Seeing one of the metros in the tunnel.

The wall behind the track is partially tiled in beige ceramic tiles. A row of empty advertising boards is placed in brown ceramic tiles.

Plan of the station of the line and their connections. The other terminal of the line is under the arc de Triomphe. 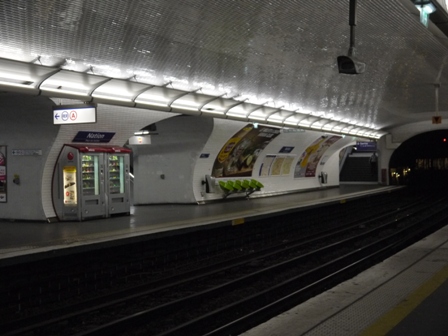 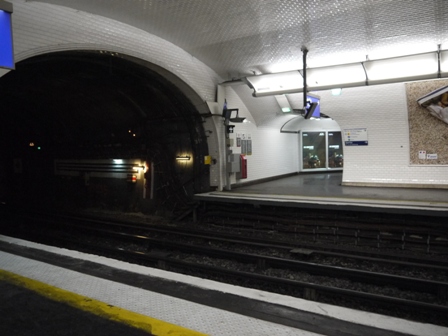 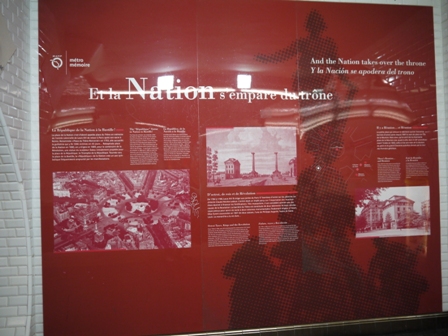 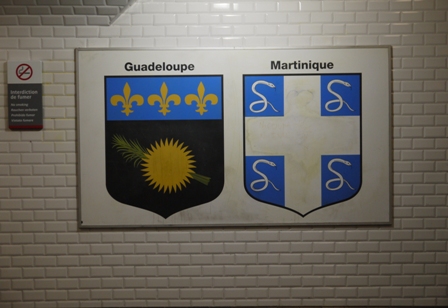 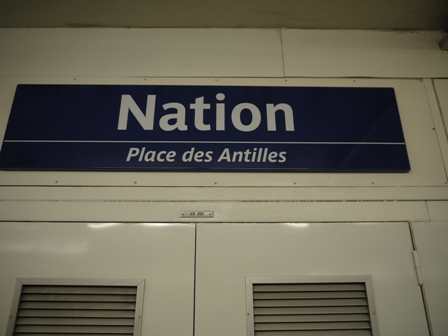 Plexi-glass display of the nation.

The insignia of Guadaloupe and Martinique have been fixed on the wall of the platform direction Mairie de Montreuil.

The station name has been written in white mixed case letters on a blue background. Underneath it it also has the name Place des Antilles.