Maraîchers is an underground station on the Paris Metro. The station opened on 10 December 1933.
It is situated in the 20th arrondissement. It takes its name from the rue des Maraîchers - street of the market gardeners.
The station is served by the metro line 9. 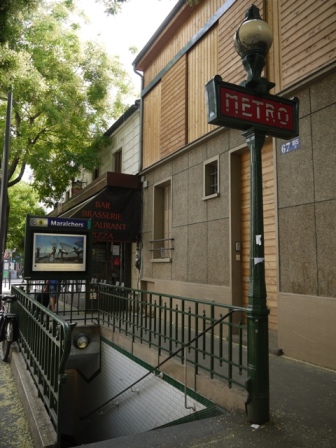 Outside the station is a lamppost of the style Adolphe Dervaux. The white lettering of the sign is made of sharp capital letters on a red panel and light up at darkness.

Three round lights are placed at the end of the entrance on level with the pavement.

The surround of is made of a green metal fence alternating shorter and longer bars. 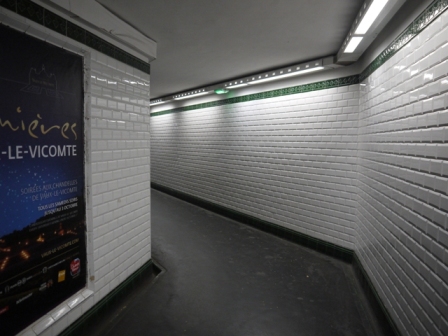 The tiles in the corridor are white rectangular ceramic tiles with a raised centre. The walls are tiled until nearly the ceiling.  They are topped with a row of dark green flower tiles. At ground level is a row of larger plain green tiles.

There is some advertising in frames made of white ceramic tiles. 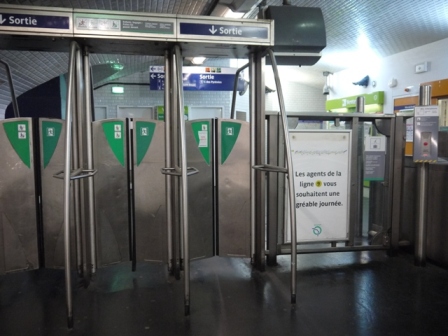 You exit the platform through solid metal swing doors which open in the middle when you step on a pressure point in front. 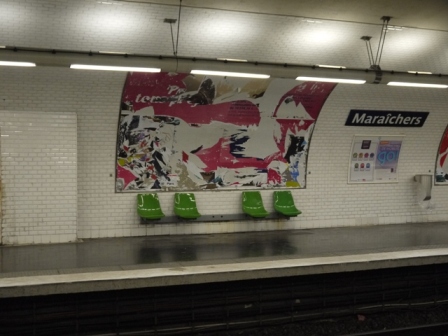 The advertising frames on the platform are made of unpainted metal. Underneath it are green plastic seats fixed to a grey bar on the wall.

The walls are covered in white rectangular tiles with raised centres. The first row at ground level is white, larger and flat.

The signage is in white mixed case letters on a dark blue background.

Grey tubes of light are suspended by wires from the ceiling. 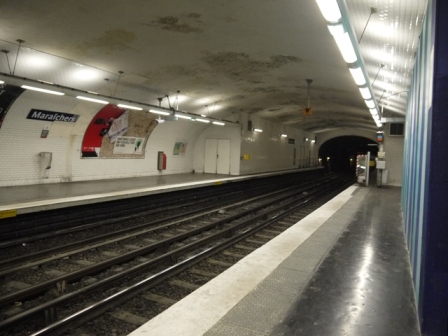 The station has two side platforms. The edge is marked with a thick white line and a row of grey tiles with raised circles to assist sight-impaired passengers. The ground is painted in grey.

The vaulted ceiling has been painted but needs another tidy up.