Lourmel opened on 27 July 1937 when the line was extended from La Motte-Picquet - Grenelle to Balard. It takes its name from Frédéric Henri Le Normand de Lourmel (1811-1854), a general in the French army.

It is situated in the 15th arrondissement.

The station is an underground station served by the metro line 8. 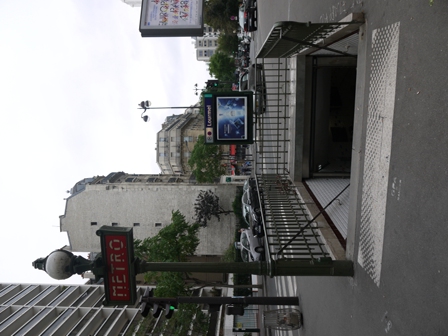 Entrance to the station.

It is enclosed in a green metal fence made of bars of different lengths on a stone base. The station sign is fixed to the fence in a square metal frame. The top shows information of the metro line number and the name of the station. The lower part contains changing advertising.

Metal handrails are fixed to the white tiled walls on either side.

Unlike other other entrances of the same type, this station has no round lights fixed to the far end of the entrance.

On the left side of the entrance is a green lamppost designed by Derveaux. It incorporated a red panel with the word Metro in white transparent letters which is lit up at darkness.

A thick row of plasticised circles mark the entrance for visually impaired passengers. 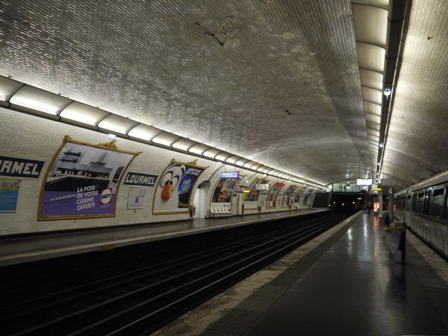 The station has a centre and a side platform. Advertising panels surrounded by mustard coloured ceramic tiles have been intergrated along the wall. They are decorated with two small corner and one large centre flower embelishment on the top.

The vaulted ceiling is tiled in small white rectangular ceramic tiles with a raised centre. The tiles continue until the ground.

The floor is painted in a grey non-slip covering.

The platform edges are marked with a thick white line and a grey band of raised circles.

Platform lights have been placed over the edge of the the side platform and the centre of the centre platform. 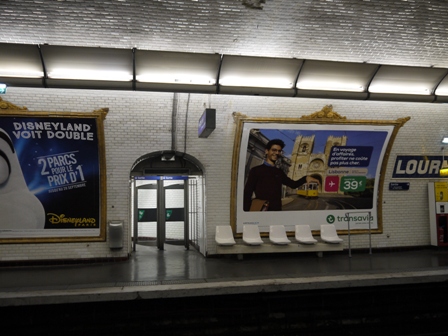 The lightling consists of lights fixed on a lower metal bar are reflecting from the curved upper sheet. They have been designed by Bruno-Gaudin.

Some white plastic seats have been fixed to the wall with a metal beam. Next to them is a steel frame to lean against while waiting.

Passengers can exit the platform (direction Balard) through a short corridor with metal framed glass doors. Passengers push the metal centre part to open the doors.

An escalator leads directly to the surface. 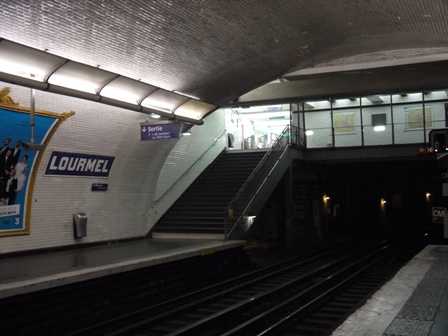 Access to the platform from the connecting bridge is via a short set of stairs.