Jasmin is an underground station and opened on 8 November 1922.
It is situated in the 16th arrondissement. The station takes its name from the Occitan poet Jacques Boé (1798-1864), who was known under the name of Jasmin in French.
It is served by the metro line 9. 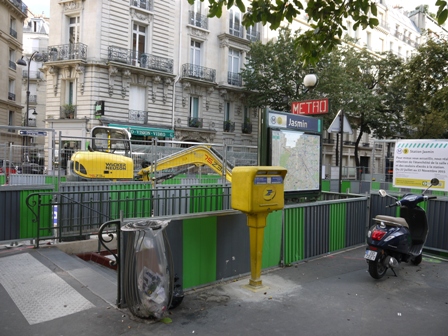 Building work is being carried out at the ticket hall and the entrance to improve access.

The ballustrade is made of green metal.  It has bars of different lengths.  Due to the building works green and grey corrogated sheets have been placedaround the outside of it. 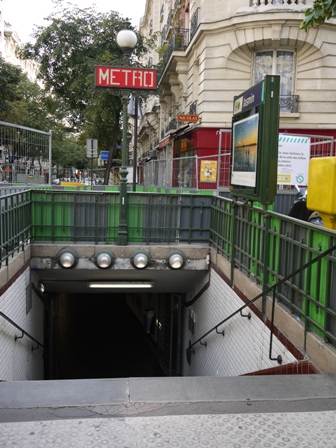 The station has one of the rare Val d'Osne post as a marker. The red metro sign is rectangular with angular white letters spelling METRO. It is surrounded by green swirly iron-work.

Above it is a white globe light.

The walls of the entrance are tiled in white and are bordered by chocolate brown tiles. Handrails can be found at both sides.

Four round lights have been installed at the end of the entrance at street-level. 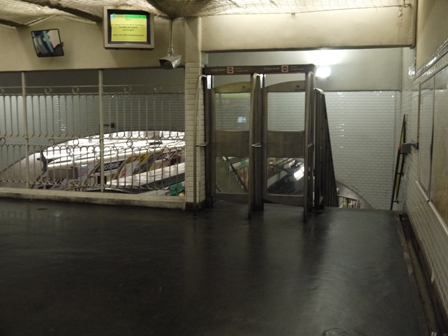 The ticket hall can be found on the mezzanine floor, directly above the tracks.

The monitor hanging from the ceiling gives passengers information of any traffic disturbances.

The stairs are split by a fence. Exit from the platfrom is throught one of two steel doors with glass panels. A turnstyle to validate the ticket is at the bottom of the stairs. 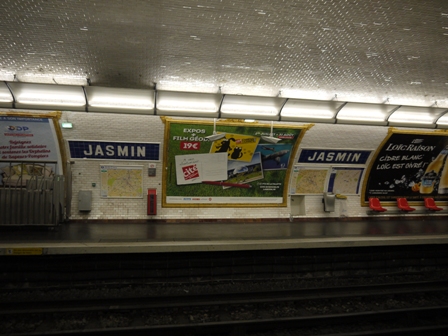 The red plastic seats are fixed to a bar on the wall.

The honey-coloured frames of the advertising boards are made of ceramic tiles. On the top  are two smaller flower embellishments at the corners and a larger one at the centre.

The light are uplighters reflecting on the top metal cover. They are in the Bruno-Gaudin style. 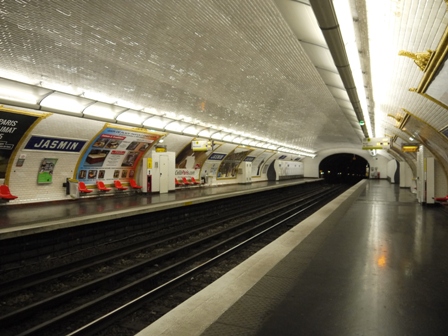 The two platforms are on either side of the tracks. A white line and a row of knobbed tiles mark the edge of the platforms.

The vaulted ceiling is tiled in white tiles with a raised centre. 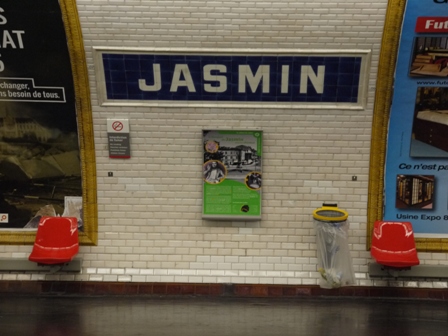 The signage is in the style of the CMP company of the beginning of the 1920: White capital letters are painted on dark blue square ceramic tiles. It is surrounded by a frame of white ceramic tiles.