The underground station opened on 13 August 1900 with the start of operating the line 1.

It is situated at the intersection of the 1st and 8th arrondissements on the place de la Concorde. It is served by the metro lines 1, 8 and 12. 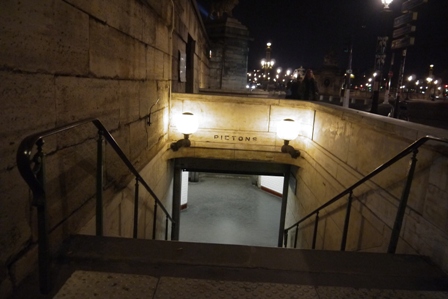 Entrance to the Concorde station from rue Rivoli. The stones are an extension of the wall around the Tuileries. Two lamps on a brass arm are place in the corner above the frame. The entrance is labelled as PIETONS - pedestrians. There are no signs for metro or metropolitain outside. 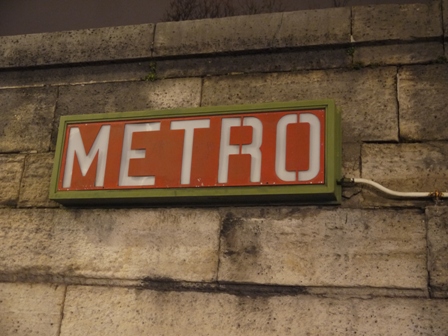 Lit metro sign on the wall. The letters METRO are cut out of a red background,showing the white light. 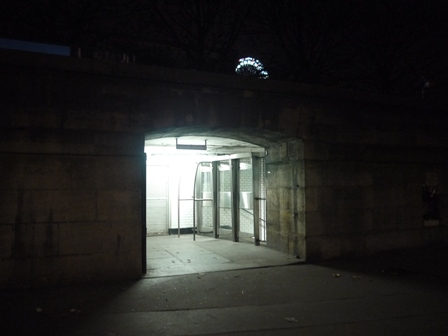 Exit from the station toward rue Rivoli. The glass doors lead into a well lit area under part of the Tuilerie gardens. 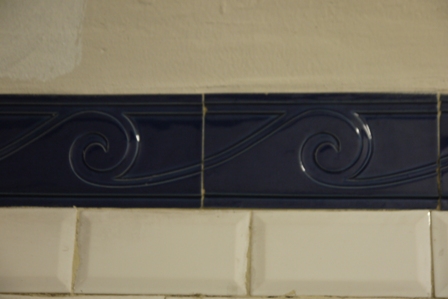 The border tiles in the corridor towards the line 12 are dark blue with a raised wave pattern. The tiles are smooth otherwise.

Below are white tiles in the metro style. 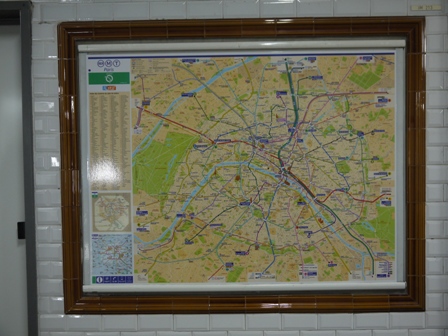 Map of the metro and tram network in a brown ceramic frame. 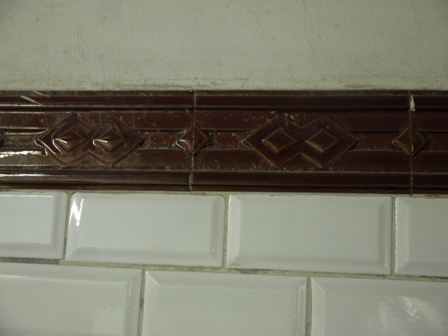 The chocolate brown border tiles in the corridor has single and double diamont shapes. The geometric shapes are set on a centre ridge. 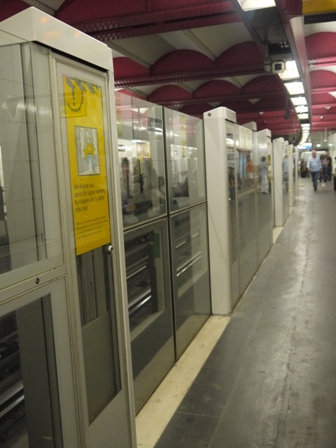 Platform separation doors have been installed on the line 1. A white line has been painted on the ground where the doors open.

The doors open automatically after a metro train has arrived. 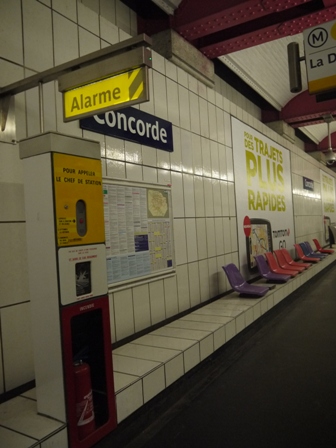 The walls are tiled in large, white flat tiles which have been placed vertical. The same tiles have been used to build a base for the purple and pink plastic seats. An emergency call point is close by to call the station master.

The advertising posters are in metal frames, stuck close to the wall. 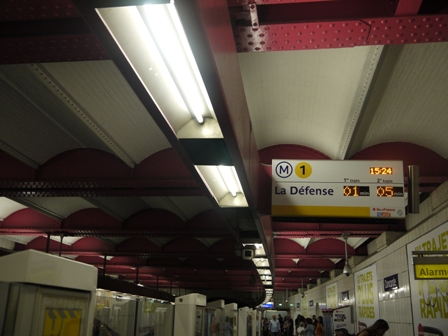 As on the platform of the line 1, you can see the iron structure above. It is painted red.

The metal light casings are red in the Andreu-Motte style.

The electronic display shows the line, the current time and the waiting time until the next two trains. 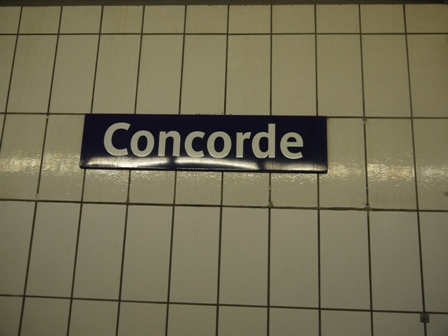 The signage is in white upper- and lower case letters on a blue background. 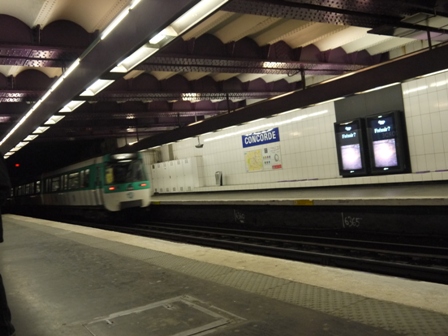 The ceiling of the platform is supported by steel girders painted purple. It has several small arches to give it more strength.

The edge of the platform has a broad white line and nobbed tiles, but no yellow line.

Advertising is in large digital frames. 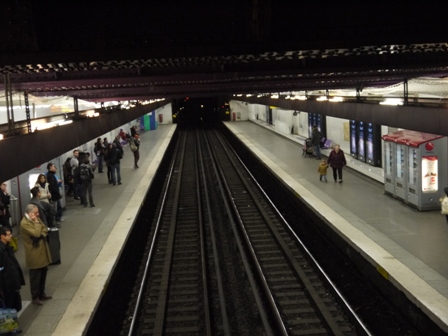 View from the link bridge over both platforms. The platforms are on either side of the tracks.

On the platform to the right - direction Balard - the seats are fixed on a base of white tiles, although not many seats remain. 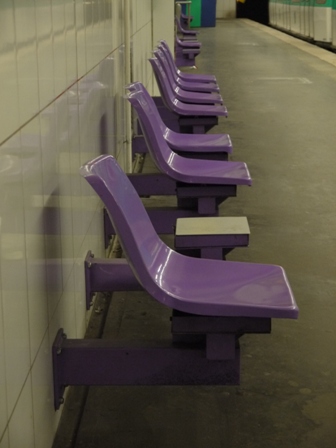 Purple plastic seats are fixed along the wall of the platform direction Creteil. The comfortable seats are declined slightly. 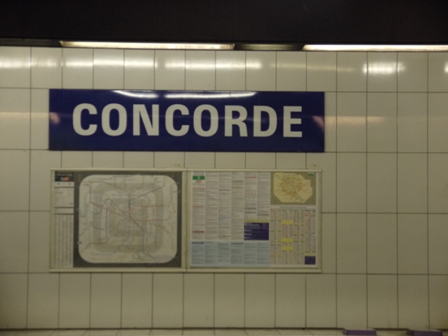 The signage on platform 8 is in capital white letters on a blue enamel sign. The sign is fixed on large white rectangular tiles, which are fixed vertical.

Below the sign is a metro plan with the zones and the transport rules.

Line 12 started operation on 5 November 1910. In 1991 the platform was refurbished with square white tiles and blue lettering holding the text of the Human Rights Declaration. 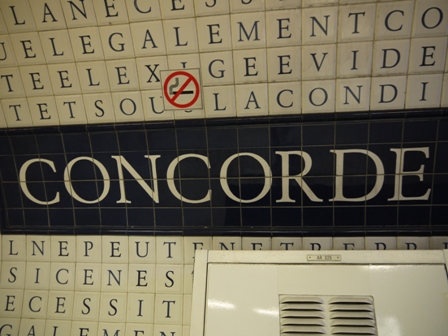 The station name is stencilled in narrow uppercase letters on square dark blue tiles, which are surrounded by a blue frame. 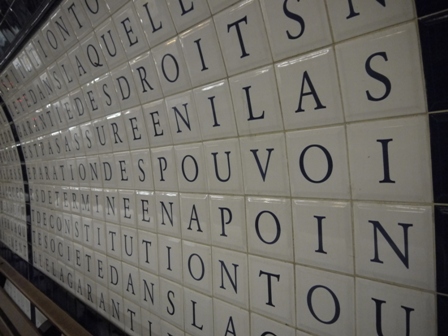 The text of the human rights declaration is continous without spaces or signs. The signs are collectively placed at the bottom. 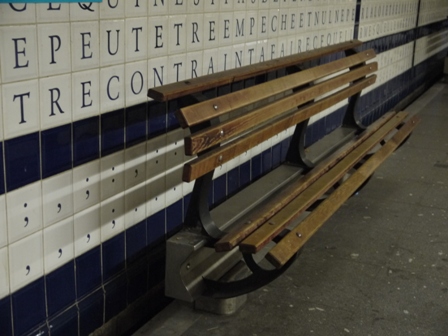 The narrow wooden slatted bench has a double bend. 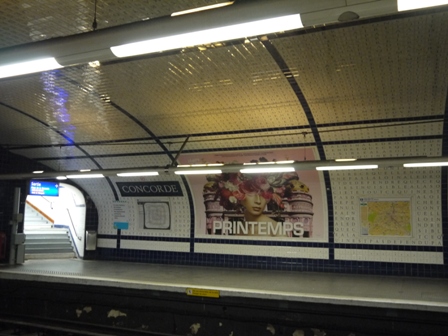 Entrance to the platform is from the end. The curved ceiling is tiled. The text of the declaration stretches from one platform to the other. It is devided in sections by blue tiles. Advertising is in a white ceramic frame. The silver lights are suspended from the ceiling.