Bérault is situated on the border of the communities of Saint-Mandé and Vincennes. It takes its name from the former deputy mayor Bérault de Vincennes (1796-1871).

It is an underground station served by the metro line 1. 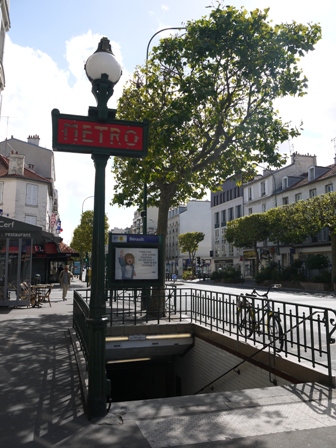 The main entrance has an enclosure made from green metal bars of two different lengths with diamond shapes at the ends.

It has two strip lights at ground level at the end of the entrance under the station sign.

A white band of small raised circles has been stuck before the top step to help visually impaired passengers to feel the top of the stairs.

The station sign is in a modern square frame. The top shows the station name and the number of the metro line.

The lower three quarter os the frame show a series of advertisements on the side facing the steps. On the other side is a plan of the metro. 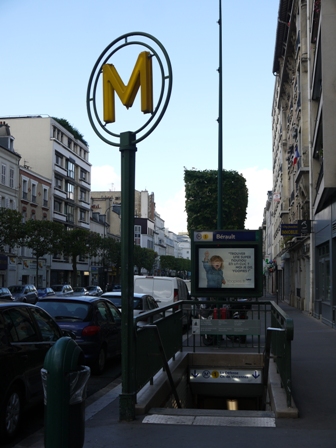 The second entrance is marked with a double circle with a large yellow letter M on a green pole. It is reserved for passengers with valid tickets. The sign directs passengers without ticket to the nearest ticket sale entrance at 98 av de Paris in three languages.

The enclosure is made from green metal bars of equal lengths. Fixed to it are two metal handrails.

It has the same type of station sign as the other entrance. 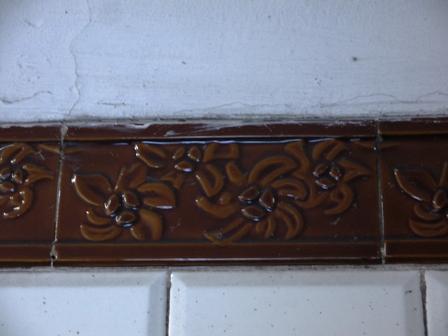 The border tiles are made of brown ceramic tiles with raised top and bottom edges.

In each tile are four sets of holly leaves with berries.

They have been placed on top of the white tiled walls. 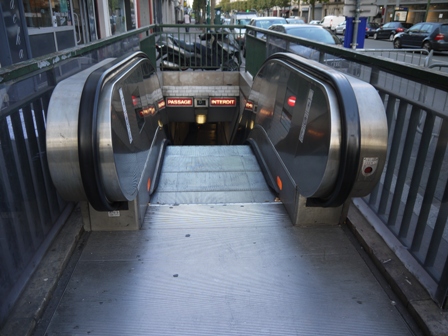 The station offers an exit via escalator. 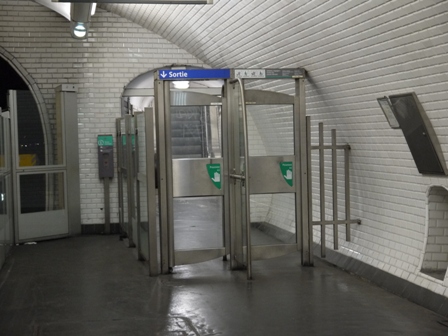 Exit from the platforms is from the end. The side platforms have two glass doors with two glass panels each in a metal frame. To open them passengers have to push the doors.

The walls are tiled in white ceramic tiles with a raised centre - the so called 'metro' style. 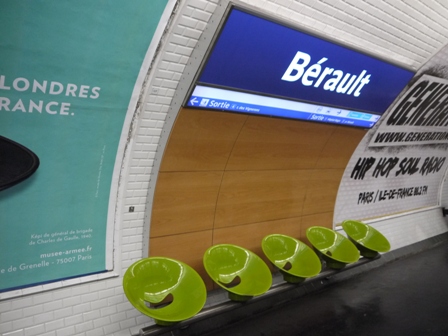 Seating is provided in the form of light green metal half bowls with a 'smiley' slit. They are mounted on a round silver bar and fixed to the bottom of the wall.

Behind the seats is a wooden panel. The upper part of the panel.has the signage. It is made of a blue lit panel with white writing.

Advertising posters have been placed in large frames made from white ceramic tiles. 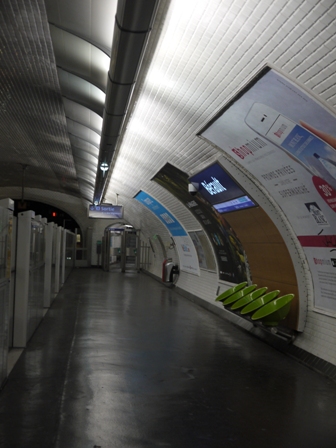 Bérault was the first station on the Paris metro where platform doors were added in 2009.

The lights were designed by Bruno-Gaudin. The lights are fixed to a smaller metal bar and reflect on a larger metal canopy above.