Avron is situated on the border of the 11th and 20th arrondissements.

It is an underground station served by the metro line 2.

The station opened on 2nd April 1903 when the line was extended to Nation. 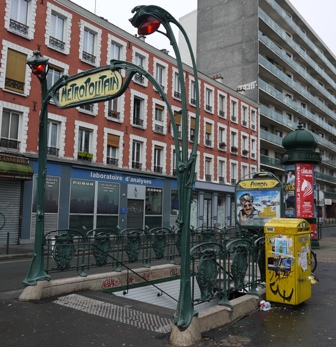 The entrance to the metro station is under an art nouveau sign, which is held up by two lampposts in the shape of flowers. They are painted dark green. Their lights are red.

The art nouveau sign has the word Metropolitain in green capital letters written on a yellow background.

Both the lampposts and the green fence panels designed by Guimard are fixed on a low stone border.

Metal hand rails are fixed on the tiled walls.

The entrance is marked by a wide white strip with raised circles. 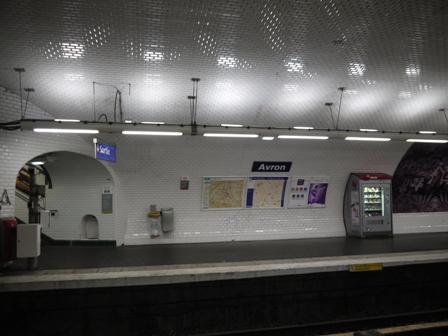 Entrance to the side platforms is from the side towards to end of it.

The vaulted ceiling and the walls are tiled in small white rectangular tiles with a raised centre, the so-called metro tiles.

The platform has no barriers. 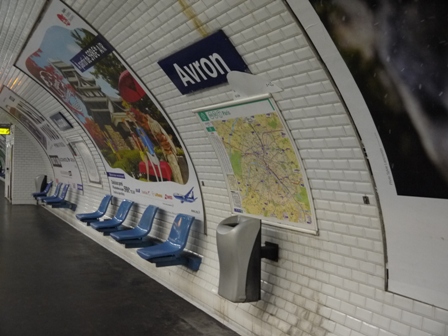 The platforms have been furnished with light blue plastic seats mounted on a blue metal bar fixed to the wall.

Behind the seats are advertising boards with thin metal borders.

Underneath the sign is a map of the transport network in a white frame. 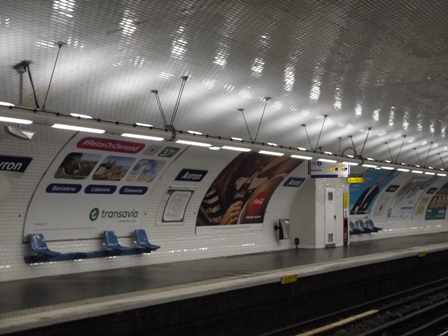 The platform lights are in a long tube strung by pairs of wires from the tiled ceiling.

The platform edge is marked with a band of raised circles and a white line to help visually impaired passengers.