It is an underground station situated in the 7th arrondissement, outside the National Assembly.

It is served by the metro line 12. 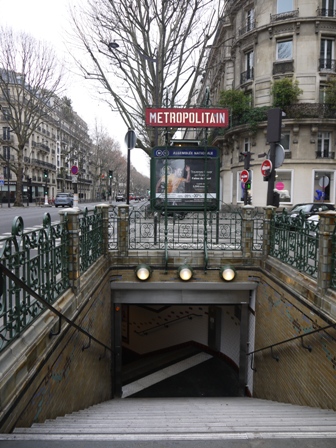 The entrance to the station has a green enclosure made from wrought iron amd fixed to pillars with brown ceramic tiles. Some of the curled iron are higher than the main top level.

At the back are three small round lights.

A red lit sign hangs from two green curved metal bars attached to the back of the fence. The letters METROPOLITAIN have been removed from the red background to reveal the writing in white.

Below it is a glass covered display with an advertising poster and the station name and metro line above it in white letters on a blue background.

Each of the outside steps has a narrow white line to mark the edge.

Metal hand rails have been fixed to both walls. 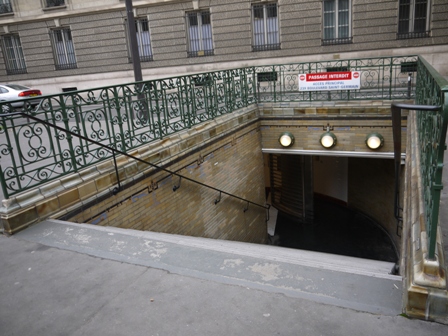 The exit only has a green metal fence made of wrought iron. The top is level.

Fixed on the fence is a sign to say that entrance is forbidden and that the main entrance can be found at 239 boulevard Saint.Germain.

Metal hand rails have been fixed to the walls.

The station can be locked with swivel doors made from steel bars. 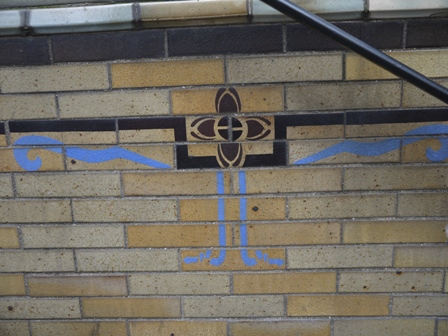 The tiles on the entrance walls are different shades of light brown and are not glazed.

A dark brown stylized flower has been stencilled on the wall, together with a black line and light blue ribbons. 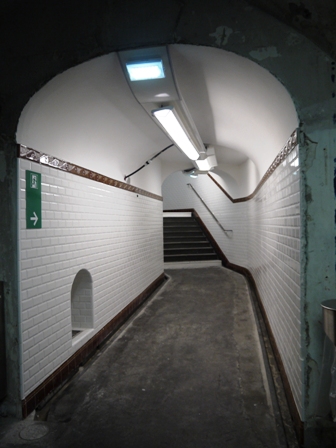 The corridor is tiled in white ceramic tiles with a raised centre. They are topped with a row of brown border tiles with a wave pattern.

Above it the walls and ceiling are painted white.

Some light tubes have been attached to the ceiling. 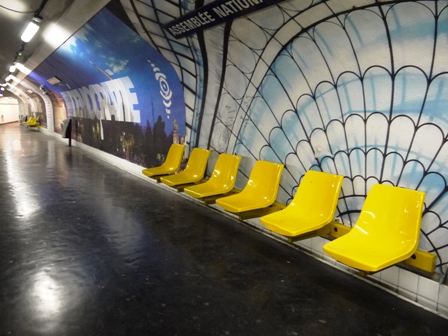 The decoration of the platform is changed with each renewal of the legislature.

Yellow plastic seats have been added to a yellow metal bar fixed to the wall.

The walls have been plastered with architectural features of the parliament. 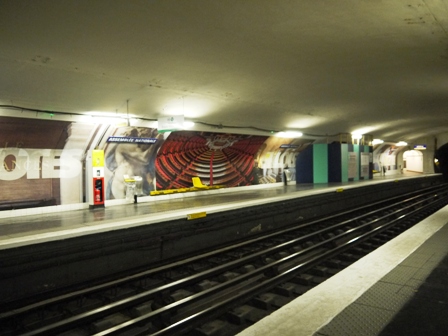 There is no advertising on the 90 metre long platforms.

The edge of the platform is marked with a thick white line and some rows of raised grey circles. 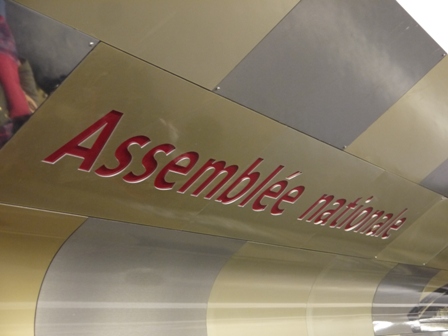 The platform name is engraved in mixed case letters on a metal plate. The letters are coloured red. The panel is flush with the other panels.

The whole wall is constructed of rectangular panels of different lengths. The top panels are curved to simulate the vaulted ceiling.

Some panels hold wording such as ordre du jour séance publique, or Partout où ses membres sont réunis, là est l'Assemblée nationale. (Everywhere, where its members are reunited, is parliament). Others are beige, silver or reflective mirror board. 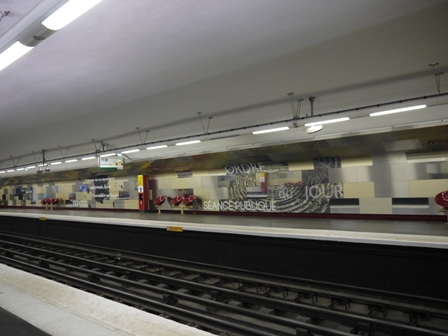 Red metal half-bowl shaped seats have been fixed to beige T-bars from the ground.

A row of white metal tubes with light tubes has been suspended by pairs of wires from the ceiling.

The edge of the platform is marked with a thick white line and some rows of raised white circles.