It is situated in the 3rd arrondissement, close to Arts et Métiers, an engineering and research graduate school from which it takes its name.

The underground station is served by the metro lines 3 and 11. 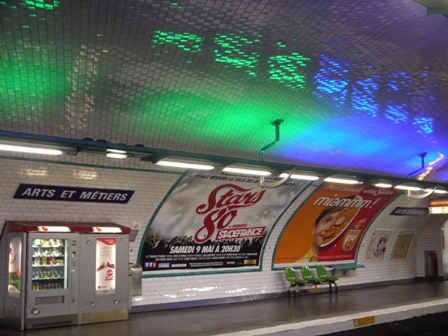 Both the walls and the vaulted ceiling are tiled in white.

The strips of light also throw green, yellow and blue light onto the ceiling.

Seating is provided by a group of green, free-standing plastic seats or a bench fixed to the wall.

The advertising posters are in green ceramic frames.

The signage is in uppercase on blue plastizised frameless signs. 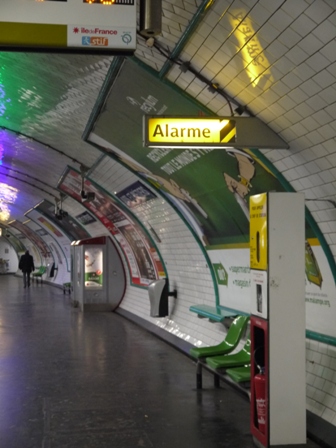 The wall is covered in small, white, flat tiles. In case of any serious issues, the station master can be called using the Alarm post. The lit sign signalling the location of the post reflects in the tiles.

Passengers can also buy a snack or drink while waiting for the metro.

The floor is painted grey,

In 1994 the platform was redesigned by François Schuiten to mark the bicentenary of the Conservatoire National des Arts et Métiers. The curved walls are covered in copper sheets, giving travellers the feeling to be in Jules Verne's submarine Nautillus. 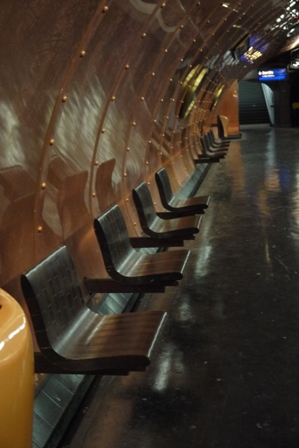 Passengers can sit on individual wooden seats fixed to the wall while waiting for their metro. The copper sheets have been fitted with rivets.

Access to the side platforms are from the ends. 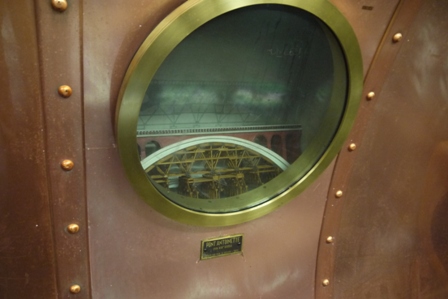 Several bullseyes with brass fittings are fixed to the wall, showing different scenes. A bridge can be seen from this bullseye. The Pont Antoinette is from the end of the 19th centuary. 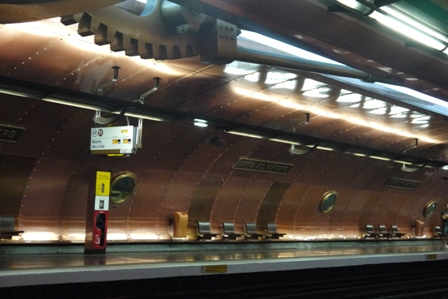 A large gear and drive shaft has been placed in the centre of the ceiling.

There are no advertising panels on the platform; it would have spoiled the illusion.

Lights are fitted to the ceiling with scythe-shaped brackets, in the Ouï-dire style.

The signage is custom-made in the style of the platform.

The brass uppercase letters are on a black sign in a brass frame with rounded corners. The boilerpalte is fixed to the copper walls.