The station opened on 1 September 1900 under the name of Obligado. On 25 May 1948 it changed its name to Argentine to thank Argentina for their food aid received after the second world war.

It is situated on the border of the 16th and 17th arrondissements under the avenue de la Grande-Armée.

It is served by the metro line 1. 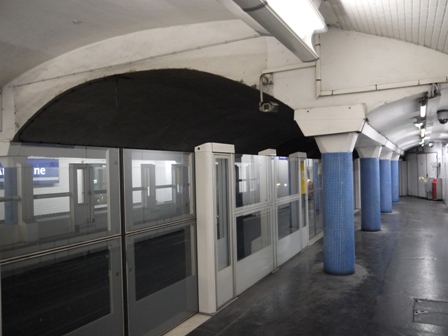 The ground of this underground station has been painted grey.

The far end of the platform is supported by four round pillars painted blue. 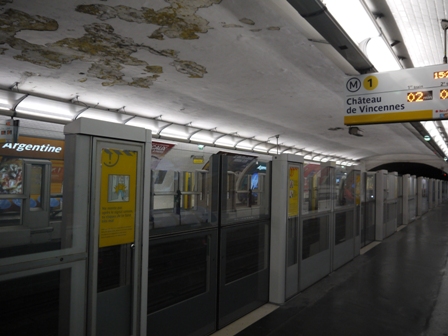 Platform doors separate the platforms from the tracks since 2008. 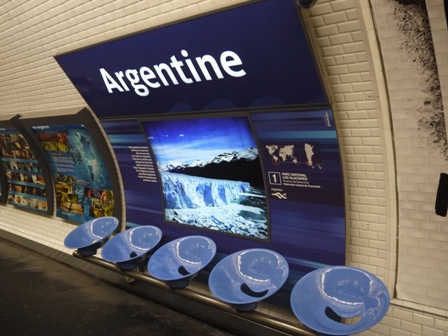 The sign shows the number of the metro the present time and the direction of travel. It furthermore shows in how many minutes the next two metro trains are due to arrive.

The lights run along the platform screens. They consist of a amsller metal strip with lights uplighting and reflecting on the larger metal metal canopy.

Light blue metal seats in the shape of half bowls with a little smilie have been added to a silver metal bar fixed to the bottom of the wall.

Behind them is a large lit panel with the station name in white on a blue background and an Argentinian landscape.

Entrance to the platform is from the end. The exit is shown by a blue lit sign hung from the ceiling.

The walls are tiled in white rectangular ceramic tiles with raised centres. 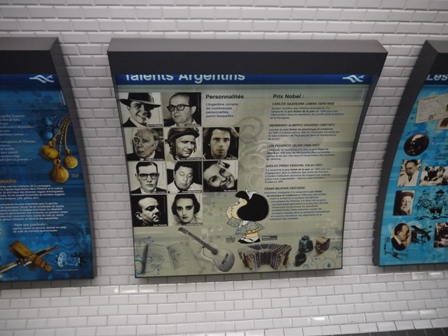 Several other lit panels have been placed on the wall depicting Argentinian topics, such as famous Argentinians as shown here.