The station opened on 7 October 1902.
Anvers is situated on the border of the 9th and 18th arrondissements in the Pigalle area. It is named after the city of Antwerp (in French Anvers) where the French defeated the Dutch during a siege in 1832. The underground station is served by the metro line 2. 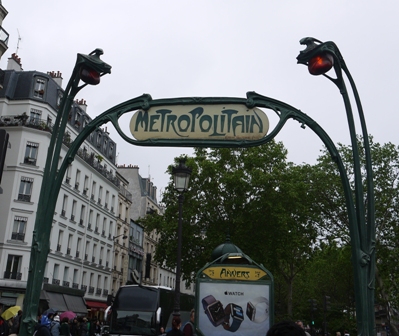 The entrance to the station is in the style of Art Nouveau. To the left and right are two tall lampposts in flower shape with red lights. They hold a sign between them. The writing on the sign is "Metropolitain" in green letters on a light yellow background in Art Nouveau Typeset. 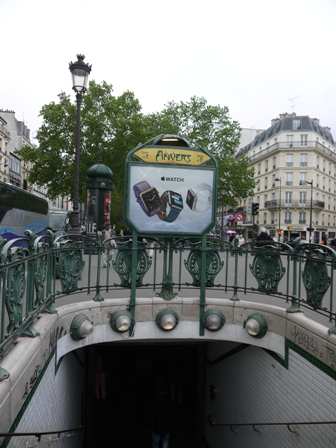 The green cast-iron balustrade by Hector Guimard is made of panels with nature shapes.

At the end of the entrance at ground level are five round white lights in green metal fixing.

Above it is a metal station sign with the name Anvers and the number of metro line.

A small light fixed to the top frame is directed to the sign and advertising when it is dark.

The walls are tiled in small rectangular white tiles with a raised centre.

The top row of the tiles is dark green with a geometric flower pattern.

Hand rails are fixed to the tiled walls at both sides. 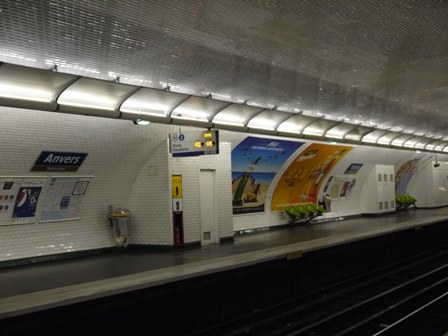 The station has two side platforms. The ground is painted in grey, with a white thick line to highlight the edge towards the tracks.

Lime green metal seats in half-bowl shape are fixed to the wall with a metal bar. They are placed in front of large advertising boards in white ceramic frames.

The silver coloured lights run above the edge of the platform. Rows of light tubes shine up and reflect on the top metal flat boards.

The vaulted ceiling is tiled in white rectangular tiles with a raised centre. 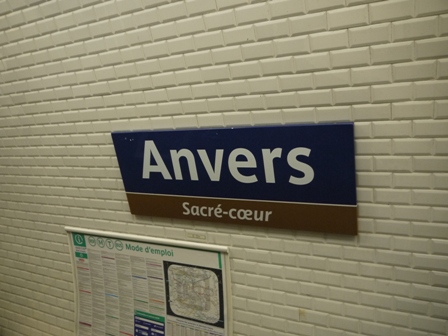 The main name of the station - Anvers - is written in white letters on a blue background.

Below it, on the same sign, but separated by a thin white line and with white writing on a brown background is the additional information "Sacré-coeur".

Below the sign is in a white frame with the general transport conditions and a map of the metro with its zones.