Alésia is an underground station which opened on 30 October 1909 when the line was extended south from Raspail and Porte d'Orléans. It takes its name from the battle of Alésia in the Gallic wars where Vercingetorix surrendered to Julius Cesar.

It is situated in the 14th arrondissement.

The station is served by the metro line 4. It is in process to be renovated for the refurbishment of the line and the installation of platform barriers scheduled for 2020. 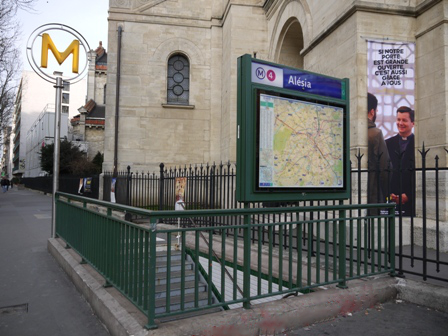 The original lamppost of the entrance has been replaced with a silver pole of the 1970's period. A yellow light shaped as a large letter M is surrounded by two steel circles.

The station sign is a green frame with glass. In it has been placed a map of the metro network. Above the map is a blue bar with the station name and to the side of it the line number of the metro. 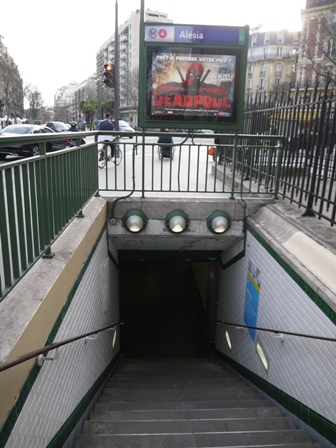 Entrance to the station. Metal handrails have been fixed to the side walls. The walls are tiled with small white ceramic tiles and green border tiles.

The station sign, which is intergrated into the short section of theenclosure shows changing advertisements at this side.

The enclosure is made of two panels of green metal bars on a low stone base. The right side is the fence of the adjacent church.

At the back - at ground level - are three round lighs in green light fittings. 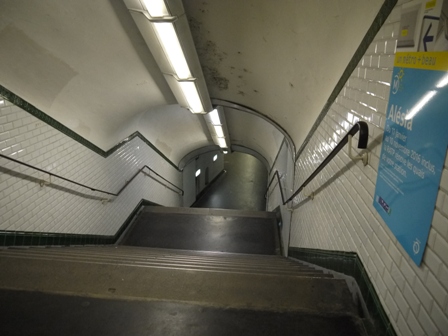 Stairs down a corridor towards the platform. Metal handrails have been attached to the walls.

The walls are tiled until about shoulder height. The ceiling above the green border tile is painted white.

A continuous row of lights has been placed in the apex of the ceiling. 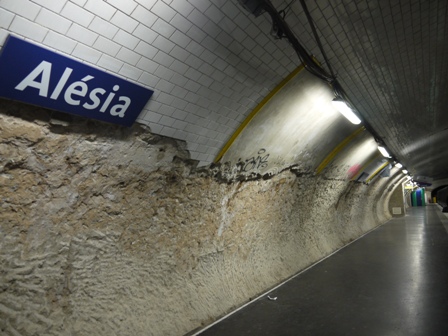 The platform signage is a blue plasticised sign without frame and white lettering. Unlike the walls in the corridor, the tiles on the wall here are white and flat.

The lighting has been replaced with temporary light.

The lower parts of the tiled walls and advertising boards have been already removed.

The floor has been painted grey. 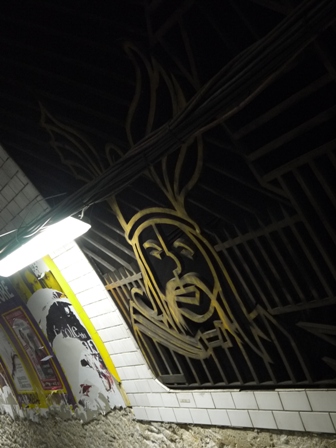 Along the platform is a ventilation and evacuation shaft. The grill of it is decorated with a figure of a Gallic warrior in cape and horned helmet. 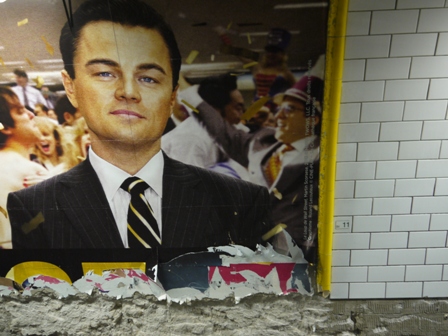 Leonardo diCaprio looks out of a half-demolished  advertising board, in a yellow ceramic frame. 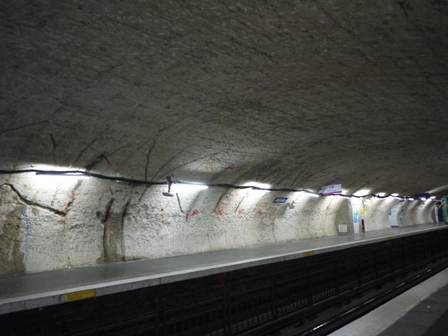 The walls and ceiling have been completely stripped to let the walls dry out for several weeks before they are renovated.

The fence between the tracks is typical for the line.